As a city, London is more than ever an architectural capital for propagating and consuming design culture. It has the highest concentration of architectural practices of any city in the world. Publications, exhibitions, events and a variety of pop-ups, pavilions and charrettes (not to mention the ever more popular pecha-kuchas) also attest to the fact. Schools like the Architectural Association (AA) in London’s Bedford Square have formed the minds of a number of world stage “star” architects.

Then there’s the skyline itself – stuffed with transplanted talent. Renzo Piano‘s Shard, the city’s new spire that stands high above the rest.  Uruguayan Rafael Viñoly‘s controversial Walkie-Talkie, which swells by the day. Herzog & de Meuron‘s current work at The Tate Modern. John Nouvel’s shopping mall at St Paul’s, and the many 1980s American corporate buildings for commercial giants in The City of London by SOM, KPF and HOK.

Reflecting on this state of affairs of ‘high end architectural culture’ versus ‘high end commissioning culture’, one cannot help but see a curious chasm in London. In some ways, we are still today very much like the Victorians. Great inventors who leave it to the rest of the world to move our inventions forward. 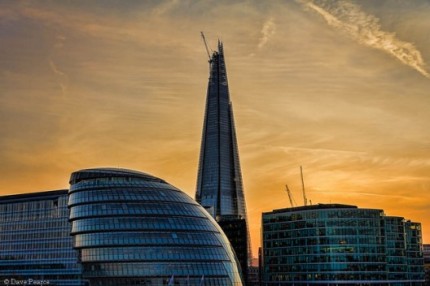 In reality, our skyline represents a small (although very visible) portion of activity here.  There are hundreds of talented architects working on projects at a more modest scale.  Many of them quietly, perhaps not receiving the accolades nor the attention they deserve. (Our neighbourhood in Shoreditch has perhaps a disproportionate number of such architects in London!)

Yet many of these architects’ practices are forming the very culture that London depends on as a hub of architectural thinking and teaching; just as Rem Koolhaas’ and Zaha Hadid’s studios did in their time.  For although both are celebrated architects today, it was not until very recently that they have been able to build in London or even the UK.

From Koolhaas and Hadid (who fought for years to make her mark in this country after her unfortunate false start with the ill-conceived Welsh Cardiff Bay Opera House competition), a new generation has emerged, one that is very adept at combining the internationalism offered by academia with the realities of an increasingly globalised market place.

For instance, David Adjaye has taught at Harvard GSD, Penn and Princeton. He continues to practice in London but he is almost exclusively an exporter, now working in Russia, Asia and the US, where he has been commissioned to design the $500 million National Museum of African American History & Culture in Washington DC.

Sergison of Sergison Bates found his academic haven in Switzerland, first at ETH in Zurich and EPFL in Lausanne and now at the Accademia di Architettura in Mendrisio.  Bates, like Sergison, taught at ETH and EPFL, and is now Professor of Urbanism and Housing at the Technische Universität in Munich. And both, after having worked since the mid-Nineties in London on predominantly UK housing projects, have since gone on to work almost exclusively abroad in Belgium, Portugal and Switzerland.  Their mentor Tony Fretton has taught at the Berlage Institute, ETH Zurich, the University of Delft and Harvard GSD and also builds abroad in Belgium, Denmark and the Netherlands.

Is this a sort of brain drain? Much of it is of course fuelled by commercial opportunism and without doubt  a genuine desire to work elsewhere, to design for the types of clients who are harder to come by “back at home”.  David Chipperfield has long lamented the difficulty of attracting the right kind of work in England and only made his way back here via Japan and Germany.

However, if we focus on the creative end of the game, we begin to see the many idiosyncrasies and perhaps contradictions in London as an architectural hub.  New forms spring off drawing boards to far-flung places only to return perhaps decades later, having been shaped and refined elsewhere.   In this way, London is a port, with an effervescent and fleeting nature.

London imports and exports in both the education and practice of architecture more than any other city.  It also acts as a meeting place for East and West, for clients, academics, critics and practitioners alike.  Much of what is conceived and agreed in London is built elsewhere and anywhere.   Sometimes by architects based here; sometimes not. This is what makes London, for all its weaknesses, ideally placed for discourse, unique in positioning how architecture is discussed around the world – and a dynamic and compelling city to be an architect.

London’s Import/Export Culture  was written by Simon Henley, co-founder of London-based studio Henley Halebrown Rorrison (HHbR), teacher and author of The Architecture of Parking. It was originally published in full in the column London Calling.