In recent weeks both the national papers and the London Evening Standard have been reporting dramatic increases in the price of houses in the capital. Up 8% in a year they say. This isn’t great. Rents are also rising sharply. Soon, many, particularly young, Londoners will be trapped, unable to rent or buy. No doubt this is increasingly the case in many big cities. But England is still arguably in a recession, the worst for nearly a century.

In an attempt to find affordable homes people move further away from their work, especially those on low wages, and spend too much of their salary and their time commuting. The cost of housing affects what we eat, whether we exercise and how much spare time we have. It affects our quality of life.

So, this is not about business or property. It’s more important. This is about home. Home is a refuge. It’s our emotional harbour. In fact it is a human right. As the UN Covenant on Economic, Social and Cultural Rights states: it is ‘the right of everyone to an adequate standard of living for himself and his family, including adequate … housing’.

Can architects help? Yes. As architects, we need to ask what home actually is, and, how it fits into the city. Indeed, the answer is as much anthropological as it is architectural, as it lies in re-thinking the house itself, in creating – not housing – but homes.

Almost a century ago the English philosopher Bertrand Russell, in his 1935 essay “Architecture and Social Questions”, wrote about the single dwelling, the nuclear family, the wage-earning man and house-keeping wife. He described how ‘each house is a centre of individual life, the communal life being represented by the office, the factory, or the mine’. The wife, isolated in the house in the suburbs, busied by chores, unable to go out to work, was dependent on her wage-earning husband. It was a mechanism for control that affected her self-esteem and status.

His solution was to divide up and share out the roles of the housewife – childcare, shopping, cooking and cleaning – and to liberate the woman to work. In this scenario dwellings would be communal, collected around a common kitchen, nursery, playground and gardens. Of course, times have changed, and although his reasoning may be old-fashioned, his proposal, more in keeping with the left-leaning ideological politics of the interwar years (or a medieval society), is still relevant.

Today, although the city and our society has changed, the dwelling remains largely the same. I’m not talking about style or what it looks like. Nor whether it’s a house or a flat. I’m thinking of what it is. Ask a developer or an estate agent and they’ll tell you how many bedrooms it’s got. Compare it to the car industry. There would have been a time when all one could buy was a 3-door, 4-door or 5-door car. I recently contributed a chapter to a book entitled The Car in 2035, which, as the title suggests, was seeking to predict how the car and the culture it has spawned would change our way of life over the next 22 years. Already Mercedes’ Smart car and BMW’s new generation Mini have bred a multitude of “minis” and “micros”. 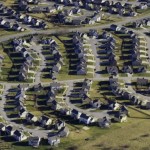 So what is the architectural equivalent? London developer Pocket has devised a range of compact homes which sell for 20% below market rate. Clearly, size matters. Their homes are cheaper to build and their developments occupy less land. However, the micro-home dates back at least to 1934 when architect Wells Coates completed the Isokon Building in Hampstead. This early icon of Modernism combined 34 flats, some as small as 25m2, with a common kitchen and laundry. Early residents included ex-members of the Bauhaus Gropius, Breuer and Moholy-Nagy as well as the writer Agatha Christie. Another famous resident in the 1960s was the then young architect James Stirling.

Another architectural landmark in compact home design was Japanese Metabolist Kisho Kurokawa’s 1972 Nakagin Capsule Tower in Tokyo. Each 8m2 capsule was prefabricated in a shipping container factory – construction photos show them being craned into position. Inside, although there is no kitchen, the aesthetic is one of equipment. Each includes a bathroom (toilet, sink and bath tub), fridge, wardrobe, bed, retractable table and a relatively large circular window. Today, as a recent article in the journal MARK (Aug/Sept 2013) illustrates, the building is in poor condition and only a few of the original 144 capsules are still occupied. It is now just a matter of time before this Ballardian high-rise is deserted. Whilst this may have much to do with the ephemeral nature of the construction and its technical shortcomings, one can’t help but think that the architect’s philosophy was in part to blame. 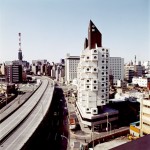 As Kurokawa himself explained: “The capsule is intended to institute an entirely new family system centered on individuals…. The housing unit based on the married couple will disintegrate”. If Kurokawa was suggesting that the nuclear family was in decline and the single-person household was on the rise, he was right. But his scheme was a fashionable oversimplification of the problem. Households have indeed changed, less people marry, more get divorced, there are more single parents, and more old people outliving their partners. But how do they actually want to live? What’s good for our health, especially our mental health, in the dislocated age of social media? The answer lies in Russell’s essay and the quiet revolution in Co-Housing that, like the Capsule Tower, dates from 1972.

A Co-Housing project could not be more different from Kurokawa’s vision. This is not about the individual. Instead it is about the group. Residents own their home but share facilities and activities such as childcare and gardening. And, because space is shared, dwellings can be smaller and cheaper.

The social and economic nature of Co-Housing means its architect must explore where to draw the line – the threshold – between home and neighbours, household and city. Home seeps out into the communal spaces – where we eat, party, where we wash our cloths, mend the bike, where children play, and we exercise. And, in an inter-generational community, the old may look after the very young. Communal meals and gardening naturally create social patterns for residents of all ages. 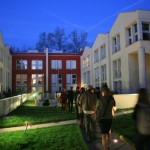 Co-Housing schemes range in size from six to forty households. Big enough to make shared space viable, small enough for residents to know and trust each other. At their heart there tends to be a common house planned around a multipurpose space, along with a kitchen, laundry, workshop, a children’s playroom, an office or library and spare bedrooms. Interestingly the UK Coalition government’s recent “bedroom tax” has been designed to drive households in rented accommodation out of dwellings with spare bedrooms to make way for larger households.

We are currently building Springdale Gardens, a scheme for six households in North London, with a shared hall, workshop and laundry. The design seeks a spatial typology that manifests the idea of communality on a backland site surrounded by houses and gardens. Our “cluster” model places a court at the heart of the site, beneath which are the communal facilities and around which the six houses are laid out. It is an intentional community.

There is perhaps one threat to this emerging model. In 2010 the Mayor’s Office launched new minimum space standards for housing. The problem is that Co-Homes may in a way be sub-standard, because the home extends beyond the dwelling. This will inevitably confound the politicians, in part, because house builders are bound to be waiting in the wings for a loophole that might allow them to further debase and downsize the home for profit. Whatever the risks, Co-Housing is gaining momentum, fueled by the 2011 Community Right to Build Act and the Mayor’s Community Right to Build fund.

Of course, the process involves finding a group of like-minded folk, searching for a site and funding the design and construction, but against a backdrop of rising house prices and with little choice on the market, this model enables people to shape their homes and build a community – on a budget.

This article is reproduced with the permission of the author. It was originally published on Archdaily.