Fascinated by the trendy obsession with the retro photograph, as reified in the bursting tills of Lomography. I bet my bottom dollar there are more downloads of the Hipstamatic app per square East London mile than elsewhere in the country. 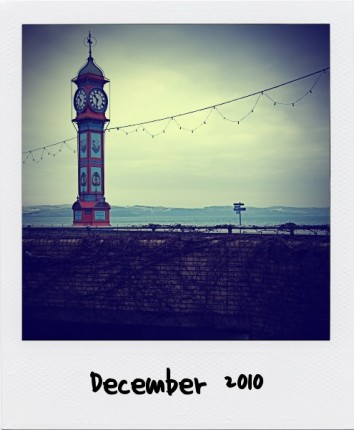 Why are we so into the Polaroid, or the nostalgia-tinged colour effects of the 70s? My Italian Memories photo is a great example. I Photoshopped and Photoshopped until I reached the satisfactory effect which resulted in someone saying ‘Oh… that’s really you? I thought it was your mum because of the colours.’

I think it’s because the Polaroid quality or indeed the faded colours of my photo infuse even the most banal subject and composition with wistfulness and aura, which Walter Benjamin defined as ‘a strange tissue of space and time: the unique apparition of distance, however near it may be’. I think his analysis lends itself perfectly to this fashionable photographic phenomenon. Snapping a shot using a Polaroid camera instantly injects distance between the viewer and the scene and therefore an other-timely, elegiac quality, which is tinged with the bittersweet yearning of memory of a past experience. Meaning is transferred to the most mundane of scenes and its sentimental value soars, albeit artificially.

Take the Polaroids in this post as an example. The shot of the clocktower is seriously boring as a jpeg. But Polaroid it and voila! An elegiac seaside town! The photo I dropped in a river. Pretty dull. Polaroid it and it becomes an artful mise en abyme and an intentional juxtapositioning of the natural and the produced, the fluid and the tangible. A stark and dull digital photo of my mum peering through the windows of her old school is transformed as a Polaroid, which captures the experience and the emotion far more successfully. My digital shot totally fails to convey the nostalgia she felt. With its faded colours and soft light, the Polaroid succeeds. So, should you ever fail to capture any sort of meaning in your jpegs, never fear, the Polaroid is here! Upload your photo here to artificially inject aura. Succumb to retromania.