London is engrossed in a vigorous debate over recently unveiled plans for the South Bank Centre, the cluster of Brutalist concrete buildings on the River Thames including the Queen Elizabeth Hall (QEH) and Hayward Gallery.

Today, the Centre has as its neighbour one of the city’s biggest tourist attractions – The London Eye – and this, with the addition of retail and other leisure-led developments in and around the South Bank, has refocused both commercial and cultural attention on the complex.

Last month, British architects Fielden Clegg Bradley Studios (FCBS) unveiled their vision for a “Festival Wing” on the site, focussing on the QEH and the Hayward Gallery. It isn’t the first time an architect has been asked to look at these buildings in recent decades. However, it is the most likely to come to fruition. 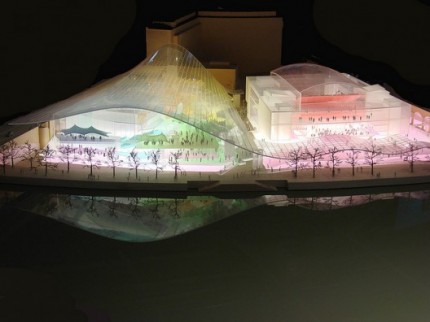 The QEH and Hayward Gallery have been under question from the 1980s when, first off, Terry Farrell planned to immerse them in a kind of polychromatic Post-Modern Pop palace. Subsequently Richard Rogers envisioned a glass wave as tall as the Royal Festival Hall rolling over the Hayward and QEH intended to offer visitors the kind of environment they would normally expect in Provence or Catalonia, but not in cool, damp London.

Neither scheme came to fruition. The QEH and Hayward Gallery, meanwhile, remain as relics of a future past, in some ways abandoned, yet still popular in terms of visitors numbers, although often castigated and even derided for their uncompromising design.

As built, the QEH and Hayward Gallery might be seen as the evolutionary link between the work of Louis Kahn and British High-Tech, although what most visitors experience is a concrete island of blind and introverted structures with weathered concrete hides as thick and grey as an elderly elephant.

Both buildings share the remains of the 1951 Festival of Britain site with the elegant, stone and glass faced Royal Festival Hall (RFH). They were the work of the Special Works Division of the London County Council Architect’s Department. As Reyner Banham pointed out in The Architecture of the Well Tempered Environment, QEH is a curious mix of the then Corbusian orthodoxy for concrete and the more immediate concerns of Archigram for the latest technologies, adaptability in use and Pop design.

Five decades on from their completion, it is clear from the current exhibition of FCB’s proposals at the RFH that these buildings are back in fashion. Adrian Forty, an architectural historian at the Bartlett, talks about the Archigram movement and the original design team’s aspiration of a cultural complex that would play host to unexpected events. Because these never really happened, the buildings and the South Bank Centre as a whole lack a certain humanity. Forty’s remarks, however, seem misleading because the Piranesian undercrofts beneath the QEH foyer were used for many years by skateboarders, while – remarkably – some of the roof terraces are now being used as allotments. 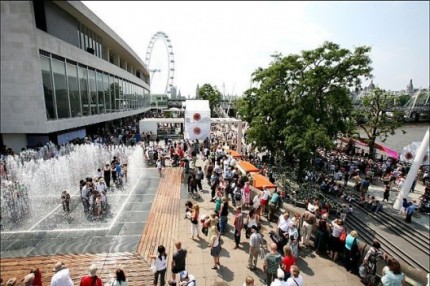 Outdoor events at The Overture, a free three-day festival to mark the reopening of Southbank Centre’s Royal Festival Hall, attended by over a quarter of a million people. (Sheila Burnett). Courtesy of Wikimedia Commons User Opringle

Peter Clegg of FCB enthuses over the concrete aesthetic of the Sixties buildings, although he is troubled by the dysfunctional underworld they harbour, and by the fact that the complex is hard to navigate. The consensus is that these buildings are remote, yet once inside them, they are rewarding: the interiors are generally more highly valued than the exteriors.

FCB propose a big extension to solve what they see as the shortcomings of the buildings. We are being set up for a very big move indeed.

On the South Bank, architects FCB have been asked to create a new central foyer for the Hayward and QEH, which they have done by enclosing the canyon between these buildings; this is only a part of the big extension. To the rear of the new foyer, in another strip of space between the QEH and Waterloo Bridge, they have proposed a glazed bar of shops and restaurants. This forms a contrasting and successful backdrop to the silhouette of the Purcell Room and the QEH, and their shared plant room, and the adjacent Hayward with its prickly roof of pyramidal skylights.

Into these spaces, and the existing undercrofts, the scheme provides renewed back stage facilities, a new archive, a “youth space”, venues for cabaret and music and a new national literature centre. A key strength of the scheme is that all of these spaces are approached via a grand external stair that converts the Berlin-Hauptstadtesque strata into a piano nobile via the first floor entrance foyer. 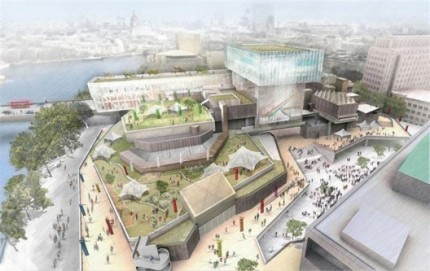 Resting on the new foyer, and high above the rest of the QEH and the Hayward, a huge glass box – a new performance and rehearsal hall – looms over the ensemble. It is as if the Hayward’s Gallery 5, which is a fairly clearly defined oblong element in the original composition, has been invited, like Alice in Wonderland, to ‘EAT ME’ and, in the process, has telescoped in size, while changing its skin from concrete to glass and coming to rest high above it all.

Initially, this problem of scale is not evident in the designs on show at the RFH because there is a lack of detail. There is nothing to measure until the eye is drawn back to either the Hayward or the QEH and to their aggregate forms and their comparative amount of variety and detail.

And sadly, the FCB addition, despite is sheer size, lacks the quiet monumentality of its immediate neighbours.

This gargantuan space, as the exhibition suggests, will offer great views over London. But this is not a crow’s nest at the top of a galleon’s mast. Nor is it architect David Kohn and artist Fiona Banner’s A Room for London commissioned by Alain de Botton’s Living Architecture perched on the roof of the QEH. Marooned by retreating floodwater,  this ark evokes the memory of Joseph Conrad’s novel ‘Heart of Darkness’ and the boat the ‘Roi des Belges’. Kohn and Banner’s Room for London is diminutive atop this Sixties icon; in comparison, FCB’s equally nautical glass intervention is a supertanker.

I am fond of the Hayward and QEH, and I am most grateful that neither Farrell or Rogers’ schemes were built; I am equally delighted that the consensus now is that, however flawed these buildings might be, they offer a unique record of an approach to buildings and cities at a point where the disciplines of planning and architecture very nearly merged. If they had, we might all be living, for better or worse, in stretches of city something very much like the South Bank Centre.

It is perhaps dangerous to speculate over what else might be done here. However, a conversation in our own studio revolved around what we consider to be one of the more fascinating parts of the original ensemble – the canyon that separates these buildings and the space under and around the Purcell Room and the plant room above (on the north side) and the Hayward entrance and terrace (on the south side). What sprang to mind was the famous glimpse one gets through the Siq canyon of the Khasneh, or Treasury temple, in Petra; because what seems to be missing in the latest South Bank proposals is an appreciation and understanding of the unique sculptural qualities of the spaces between the buildings. 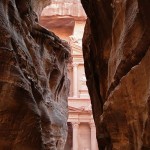 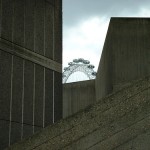 Or are we perhaps afraid of such subtle experience, of one that relies on a pure architectural sensation of being immersed within the stillness and enduring presence of these concrete structures?  Would this be sufficient visual and experiential distraction and entertainment for the contemporary mind?  There is an interesting discussion to be had when looking at the future of developments like the South Bank: one comparing the virtues of revealing places bit-by-bit as opposed to thrusting these highly visible iconic gestures at us in a mindless rush towards instant impact .

The Latest Twist in the Tale of London’s Concrete Island  was written by Simon Henley, co-founder of London-based studio Henley Halebrown Rorrison (HHbR), teacher and author of The Architecture of Parking. It was originally published in full in the column London Calling.