I came to Perseverance Works in 1986. I was the second tenant here and it was still being built. Then, when they did up the courtyard and everything, people started moving in.

We make hand-made leather garments here at Forma Leather. They’re all high-quality garments, mostly for designers – our biggest clients are Christopher Kane and Jaegar. In the old days we used to work with small shops, high street shops, but that time has changed now and they’re buying cheap stuff from imports. Only designers that can pay the money are buying quality work. That’s why we don’t have many customers, but we have good relationships. 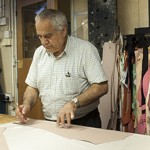 In the early days I met a salesman in a shop. I felt sorry for him when I saw him – he looked so sad. He was bankrupt and owed £30,000. I said he should come and work for me. I gave him five garments to start with and he drove off in his mini cooper to sell them to shops. Then he came back the next day and got more garments from me. He carried on like that, until he bought a van. He used to buy garments from me for £150 and sell them to the shops for £160, but the shops would sell them to customers for like £600. They liked him because he used to be there every day before they opened, waiting to sell – he’d open the back of his van and show them what he had. He’d sell in Oxford Street, Kings Road, Knightsbridge. Some days he made £1,500 in profit! He has now bought two flats for his daughters in Chelsea…

I remember when I made my first garment. I don’t have it anymore, but I remember I was so proud and so happy when I looked at it! Then my friend came from Turkey on holiday and I showed it to him. He put it on and liked it. It fit him well, so I gave it to him. It was a simple, zip jacket. It was so simple but it was nice. Maybe it’s still be in his wardrobe…

When I started here I had two customers in Germany who used to buy a lot. In those days, biker jackets were very fashionable and we used to make a lot. I used to export all over the world; to America, to France, to Italy, Florida, Sweden, Germany, Iceland… you name it! Demand was strong then, I used to have queues outside my studio of buyers wanting more to sell in their shops. We couldn’t make enough garments in time. Because nothing was imported then – there was manufacturing in the UK. It’s different though now.

It changed when Thatcher asked why are we going to carry on manufacturing, we can get it cheaper from abroad. Can you imagine, just in this area alone about 15-20,000 factories closed down in the area from here to Green Lanes. Just do a small calculation: let’s say there are just 10 people in every factory. That’s 200,000 people, 200,000 families with children probably… their jobs gone just like that. Can you imagine? 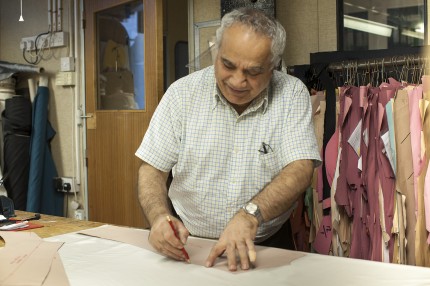 I started out my career as a photographic printer in Essex somewhere. Because in those days photography was good money. I went on holiday back home to Turkey and I thought I would open a studio. I brought some money from Turkey with me and was looking for somewhere. Then I spoke to a friend who was going on holiday and he asked me to look after his shop for two weeks. They were doing some manufacturing and some retail. I said ok… Then he changed my mind about photography and we became partners! I started helping him, and I thought it was a good idea in the short-term. And I had a share in the shop in Kensington, Notting Hill Gate. I worked there for a few years but then I thought the time has come to leave and open my own business. So I went to Essex Road, where I had a small studio. It was a 700 square feet place with two floors – that’s how I started.

I had a partner who knew the business, he had done manufacturing before, so I started with him. We worked there about 5 years, and after that my partner left – he said he wanted to do his own business. That’s partnerships for you! You become a partner and then when you think you don’t need them anymore you leave.

I stayed another year, but that place was getting smaller and it wasn’t a safe area. I had two break-ins in one year and lost a lot of money in those days. That was 1984/5. So I was looking for premises in this area and found this place. I bought it and moved in. It was just typical East London then. There was only one restaurant on this street called Ringside, they only did steak and burgers. But that was it. Can you imagine that? Now you can’t move round here, it’s really crowded after ten o’clock and very busy in all the bars, pubs, restaurants… Only one restaurant!

There wasn’t the same art feeling then, it was just manufacturing area. Not only leather but bag manufacturing, belts, garments, textiles, shoes – all kinds of manufacturers. But it’s all disappeared. It’s changed a lot in the last five years, a much faster change than in the past. It just wasn’t so crowded, it was a quiet area. But I like it here, it’s nice and lively – everything you want is here. If you want to buy something, you can buy it, there are many restaurants.

We’ve had a lot of famous people that visit here; I used to make garments for Kanye West!The Queen came to Perseverance Works in the 80s. She came to open a unit. She even bought a handbag from one studio, because British manufacturing was so strong then. 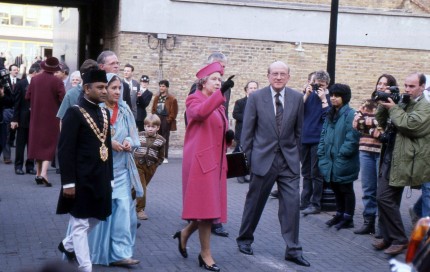 The Queen with the local mayor at Perseverance Works

But I think people are starting to value Made in Britain again though. Especially some companies, they’re trying to do Made in Britain campaigns. I used to supply Marks and Spencer, their designer label. I worked with them a few times and they came back to me and said they were doing a Made in England campaign and wanted to buy a few hundred pieces of leather. But everything has to be made in England. I said well this is going to be very difficult, you want me to use British leather which doesn’t exist anymore. We don’t have any tanneries left in England! I started looking around, I thought somewhere, somehow there is something left, some small tannery. But there is nothing, zero. There are only a few small workshops, but they bring half-finished material from Italy and they put polish or some treatment on it in England. But there is no tannery in England that makes leather from zero. For that reason, we couldn’t do the campaign. And a few other companies have said the same thing, but they couldn’t do it. But lately I can see that some people are coming back to quality garments. People want quality again.