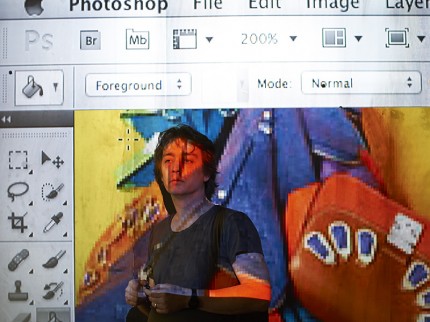 We’re primarily photographic retouchers but we branch into other areas of the digital photographic world. We started in 1999, so we’re in our 15th year. I’m the sole owner of the business, but we’re fairly small – there are only about ten of us.

We started in a tiny broom cupboard of an office in De Beauvoir and slowly expanded. There wasn’t much round there at the time, it was hard to get a bit of lunch! We were there for about 8 years, and then we were in Rivington Street in Shoreditch for 5 years. We came to Perseverance Works two years ago. This unit used to be a wet lab a long, long time ago. So it’s interesting that it’s come full circle from being a wet lab processing film to us now, doing the same sort of work but in the digital space. Even when I was young, I think I brought film round here to get it developed. We do get a bit of film through the door, but just for scanning not for processing. That’s the way things have changed in the photographic industry.

I founded Touch when Photoshop and Macs were coming to the forefront of photography. Actually, when we started not many people were using digital cameras. Then everybody started shooting digitally and the film labs really started to suffer. Initially we were just scanning film, nobody brought in raw files, and it was just a case of scanning negs and transparency. Then everybody started to shoot digitally – that was a rapid change. The quality of the digital cameras improved a lot, and that’s when all the wet labs started to really suffer. A lot of retouching companies were set up then and picked up some of that work.

Shoreditch has changed because there used to be quite a few labs such as Primary and Ceta that no longer exist… they’re still around, but in a smaller set-up. The thing with digital is people don’t need all the space and all the machinery – you can basically run your own little digital lab from a Mac in the corner of the room. And a lot of photographers have learnt how to re-touch themselves, they do it in-house. That has affected how we work – it’s why we’ve gone for more luxurious premises with the ability to offer more services such as large format fine art printing… The low end of Photoshop is now going overseas to places like India and Thailand, but the money is in high-end work for advertising campaigns. We’re firmly in and amongst that.

Everybody uses Photoshop now; that’s the hardest thing for us – showing a point of difference between a photographer who has been using Photoshop for ten years themselves or coming here and getting one of our retouchers to use Photoshop for them.

I used to be a photographer’s assistant and I worked in studios for a bit. I went to the University of Westminster and studied Photographic and Electronic Imaging Science, which is a non-artistic photography degree. It’s all about the science of photography and how things work – the technical side of things. It was the only one at the time, back then there were no digital cameras really. So we would get film and expose it to different things and measure the density of the film and so on. Then I started assisting. Touch was started within a larger company, and we set up on our own after a few years.

With digital now the entry point for photography is quite easy and Photoshop allows people to make images look quite different to what has been shot on camera. So the skill with the camera has changed and I think that has really been a game changer for professional photographers in London. It’s very hard to make a good living out of it now.

We do a lot of fashion work and advertising retouching. We’ve increased our turnover every year since we got going. I think the top end of luxury goods didn’t get hit during the crisis. We did a lot for Dior perfume, and they’ve really boomed in the last few years. A lot was written about how during the crisis people wouldn’t buy a dress but they would treat themselves to lipstick or something. We did a lot of work on perfume campaigns and their budgets and advertising have remained buoyant for us. We didn’t really experience any downturn during that recession; we expanded really and were able to invest in more services.

Some of the clients we have lost in recent years were in that middle fashion market, which has struggled. those kind of companies have either taken the retouching in-house or gone to the cheapest vendor – it’s not really about quality and relationships it’s just about the cost. We don’t want to play that game too much – we will to a point but after a while you get into spiralling cost-cutting measure with the client. companies in that space are feeling the pinch and want to cut costs to make bigger profits, and that’s across all suppliers from the clothing manufacturers in Bangladesh to the photographer, the stylist on the shoot, the studio, the retouching, the printing of the posters… everywhere along the chain is asked to cut money.

Most of the team have photography backgrounds, but some come from art or graphic design. it’s one of those careers where people start out thinking they want to be photographers, but then realise that they are better served in the services around photography. Retouching companies in London have traditionally done quite well, even though budgets have been pushed down there is money for re-touch. For instance, on a shoot nowadays they might have the photographer take twice the number of pictures in a day and that means that there is more retouching needed because they haven’t managed to get what they needed with just the camera. So the emphasis is pushed onto fixing it in post-production.

The biggest change for us when we moved to Perseverance Works was having the luxury of the space. We more than doubled our square footage by coming here. We’ve also got a sister business here that does web design, which I helped set up as well. So being here allows us to have that here as well. That allows us to offer web design and apps – we’re trying to cover a few different bases now. We’re also starting to offer moving image work like grading and editing of film, and that is a key move. A lot of photographers are being asked to do moving image work, so we are trying to pre-empt that by offering those services as well. We’ve done quite a lot of work in that in the last 12 months. We had some work recently where we did the print campaign and the moving image work together under one roof. It’s a really great selling point being able to offer it all, with total consistency.