It was seamless at the beginning; we were really lucky. In my previous job, I worked with a photographer who we actually still represent now. A stylist also came with me when we started the business. When we first met, Cally was representing another photographer who actually came to Cally and gave her the incentive to open because he wanted to be represented by her again. Then we added clients as we went on. We represent around 12 photographers, 8 or 9 stylists and a couple of art directors. We manage the careers of the people we represent and contact clients on their behalf both commercially and editorially to pull in as much work as possible for them and take a percentage.

We have grown the business in a very female way. I think that very frequently when women own a business, it grows organically and they take things a bit more cautiously. They don’t gamble as much as guys do. We’ve never run before we could walk; we’ve never overstretched ourselves. So we’ve always felt quite confident in the way we were expanding. We are seven full-time staff, but we also have Location 18 – the shoot space next door – that is affiliated with us. We also have a rooftop for shoots too. We will have been going for 19 years in September.

I couldn’t say we haven’t been affected by the financial crisis, but in fact I believe it’s less about budget shrinking and more about the same budget being spread out across a wider area. In our business, what would have been 100% spent on photography is now being spent on film and so on. You’ve got so much internet usage and clients don’t have any more money in the pot, but it’s being spread across many areas.

Part of the reason rates haven’t been encouraged to go up is that photography isn’t considered as important in media as a whole, but also because since the advent of digital everybody thinks that they can be a photographer. So actually, there is so much competition that clients don’t have to pay much – there’s always someone who will do it for less. 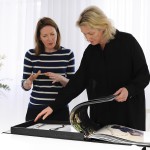 Myself and Cally are equal partners in Ellison Lee. We met in 1988 when we were working for somebody who did exactly the same as this, but we were employed by them. We worked together for a couple of years and then went our separate ways. We got back together a few years later having gained some experience and decided to open up on our own. When we first started we worked out of Cally’s back bedroom in Chiswick; we did that for about six months. Then we found a very small office in Queens Park, near where I was living. We were there for a couple of years, then we moved to a larger office in the same area.

Then about seven years ago, we decided we really wanted to buy somewhere as a future investment – a sort of pension pot. Despite the fact that we were both living in West London, the appeal of coming East was that there is a lot more industrial property around here and we knew we wanted a shoot space. Cally had been to Perseverance Works for many years for appointments with various design companies, so we came here about seven years ago.

At that time, it was already incredibly friendly, calm and tranquil but the surrounding neighbourhood has gentrified beyond belief since then. It’s mind-blowing. All the good quality bars and restaurants and new hotels. Obviously, being close to the City there’s a lot of money in the area so it’s not surprising that it’s gone this way. We were incredibly lucky to get in when we did.

Back then, I remember when we were working for other people that Central and West London were the most popular place for this kind of business. But now, a lot of clients that used to be over in those areas have moved to this part of London. When we first moved here there weren’t many people we could go out and see for appointments without getting a cab. When we were in Queens Park, nobody just called in but there are loads of photographers and studios around here so that’s changed.

We work mostly in fashion. High street shops don’t have a distinct identity anymore; when you go into one shop on the high street, you don’t know which one you’re in. All the clothes are the same, the displays are the same… nobody has an identity anymore. Cally was speaking to an art buyer about this, who said that people don’t want to look individual, so shops therefore look the same because otherwise people would have choice that they don’t want.

When clients are looking to do a particular shoot, if the photographer doesn’t have that type picture in their portfolio already then it’s very unlikely that they will be chosen. Photographers can’t have every single thing in their book, but most of them can shoot a range. Clients are generally quite specific these days, so you really do have to show what you can do. That means you run the risk of watering down what you do and it makes it very difficult to develop your own style. It can be a bit of a catch 22 situation.

You have to have really good people skills, be very well-organised, know how to prioritise and be unruffleable to work in this business. It’s a very female industry. But that’s a lot to do with the sexual dynamic in fashion photography. The biggest market for fashion photography is womenswear and normally the model is female, so the photographer is male because you have to have that chemistry between them.

Having said that, we’re going slightly against the grain because there are a lot more women in photography now. When Cally and I first met there were only a handful of female photographers. We didn’t represent a woman for quite a long time, but gradually over time there have been a lot more women coming into the industry. I think that’s because it’s become a lot more acceptable for men to look after children so that has allowed women to give more time to their careers and be more flexible about it. It would be really difficult to have a big chunk of 2-3 years out of your career and then pick up where you left off in fashion photography, which is very competitive. You’d have been overtaken by new people when you came back. But that’s changing and we have a lot more women now than we used to have.