In 2010 we posted Architect Simon Henley’s article entitled Why Cycle Cities are the Future. Although many of Simon’s visions for London as a cycle city are yet to be realised, the popularity of cycling has continued to grow in London and we continue to turn to the Continent for inspiration from their cycle-savvy cities.

A major innovation in cycling, already vastly popular in Germany and Holland, is the e-bike. The battery powered electric bikes are environmentally friendly, rechargeable within 2-6 hours and empower the cyclist to complete their journey in less time than a traditional bicycle.

Hackney e-bike retailer Fully Charged stocks numerous brands of the bikes on its online shop. With headquarters in Hoxton and PR managed by Perseverance Works’s very own LondonMedia, the company has already gained national coverage in the last week for their crime-busting heroics. 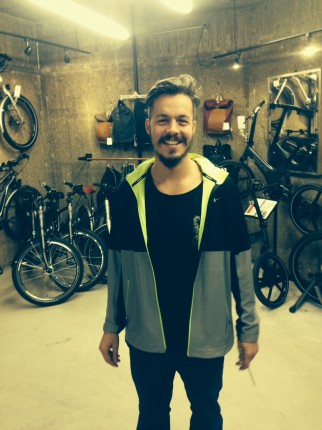 When Fully Charged founder Ben Jaconelli had his own e-bike stolen he feared the worst… that is until the thief called his company for assistance with recharging the bike, giving Ben the perfect opportunity to the track down the thief and reclaim his bike! And now the e-bike is set to gain further exposure as Fully Charged bring the e-bike into full view of the public at Old Street. For the next month Fully Charged welcomes passersby to drop in, ask questions and place orders at their popup showroom situated within the station.

Bike enthusiast Ben suggests the e-bike’s biggest selling point is the cyclist’s ability to control the level of their workout as they ride. There’s no need to even break a sweat, removing the need to shower upon arrival at your destination. While this wouldn’t appeal to fit-fanatic cyclists, e-bikes are sure to attract those travelling to meetings across town or people who haven’t taken to bicycle commuting due to a lack of showering facilities at the office.

In a week during which tube strikes have been high on the list commuter woes, I think Fully Charged’s temporary pitch within Old Street Station aptly places them to convert more London commuters to abandon the underground and discover a new e-asier bike commute. And with history set to repeat itself with next week’s strike, it might be time for pedal power.